4. Manage & monitor from vault or appliance

Role of the backup agent

Where do I download an agent? Agent requirements, parameters and prerequisites Deploy an agent Hyper-V backups Agent best practices

What is a backup agent?

The agent is software installed on a protected system which performs the backup and sends the backup data to the local appliance. 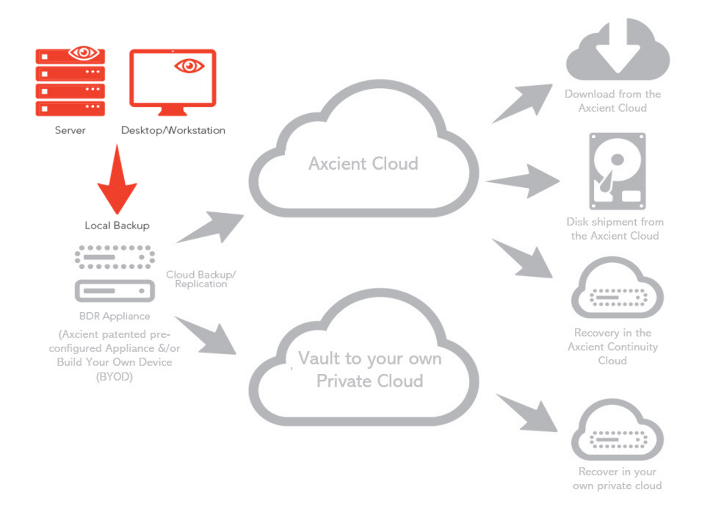 As soon as you have access to the appliance web interface, you can download the agent software and install this software onto a protected system. 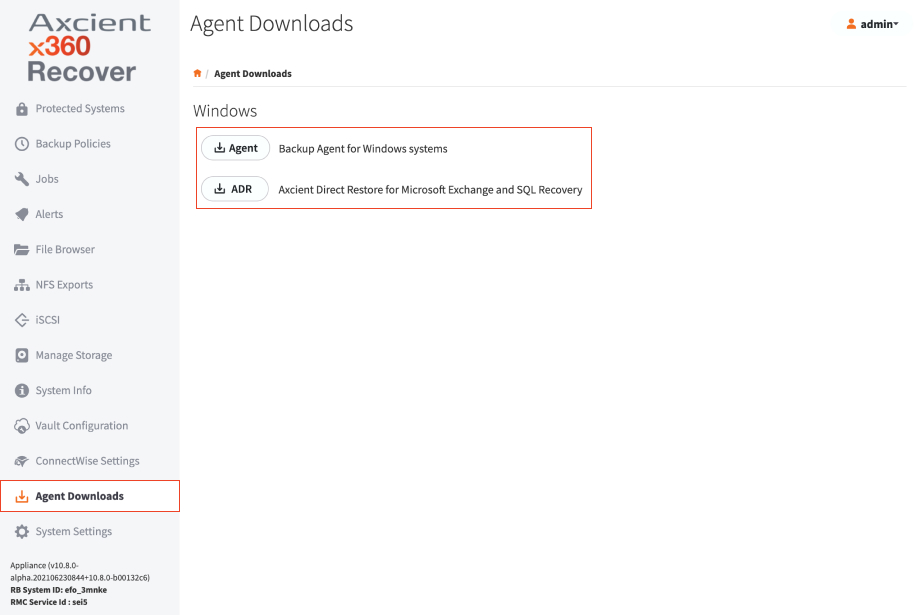 3. You will now be able to view and download agents and other components.

Prior to installing the agent, remove any other existing backup agents or products.

To add a new protected system to an appliance and begin performing backups, you will need to download and install the agent on each system to be protected.

The agent software may be downloaded from the Downloads tab located in the left menu pane of the appliance, or directly from the login screen.

Recovery is much more challenging when accessing VMs from a host-level backup:

3. If you backup your protected systems at the hypervisor host level, you lose the most important part of your backup integrity checking:  AutoVerify. The nightly boot check would only be able to check the hypervisor host itself; It would not check any of the guest virtual machines that represent the primary data set you are backing up.

What we DO recommend

In this way, all systems will be backed up directly and each system can be virtualized in our cloud (or on the local appliance) - instantly, and without any issues.

Additionally, nightly boot checks will be performed individually for each protected system, and all normal recovery options will be available. When failing back to the Hyper-V host, files can easily be restored as VHD(X) disk images again and configured as guest virtual machines.

In general, Axcient recommends running only a single backup agent on your protected system.

However, we realize you may sometimes need to run concurrent backup solutions (for example, during a transition from one platform to another.)

The x360Recover agent has been tested to successfully coexist with a wide variety of third-party backup solutions, including both image-based and file-based solutions.

Axcient x360Recover backups should be able to run successfully on the same machine configured with other backup vendors when necessary.

You'll also need enough free space available on the volume to satisfy data changes that might occur to the volume during the backup.  For the initial full base image backup, this might mean hours (or even days,  in extremely large systems.)  If the volume runs out of free space during a backup, Windows will automatically ‘free’ the VSS snapshot in use, causing the backup to fail.

Some applications have an option to generate file-level backups of their data and configurations.

This means scheduled application-level backup jobs might be writing large amounts of data to volumes that will also be backed up by x360Recover.

When deploying a new x360Recover agent, it is a good idea to evaluate the overall health of the system about to be protected.

Corrupt Windows system files can cause surprise issues with (a) Microsoft VSS snapshots (causing backups to fail) or (b) the P2V process required for instant backup virtualization.

To check for corruption in Windows system files (and get repair instructions), run:

Fragmentation occurs when there are no open disk spaces large enough to store a file in a single chunk. When this happens, the blocks must be written to disparate parts of the disk.

The best time to defragment a volume is before the first full backup is taken of the system.

Note: Since x360Recover is an image-based backup solution, defragmenting a disk volume may cause an excessive amount of data change that will be included in the next backup.  Even though the files are not changed during a defrag operation, reorganizing the block data on the drive will be detected as change by the agent.  Remember: The best time to defragment a volume is before the first full backup is taken of the system.

Important note: Do not perform disk defragmentation on a schedule!  This will generate excessive and unnecessary block change and impact backup storage consumption for little reason.

Axcient strives to conform to all recommended coding and security practices.

Our x360Recover agent software is signed by an extended validation code signing certificate, and we follow Microsoft documented best practices and use cases.

That said, the x360Recover agent is operating at a low system-hardware level to achieve successful image-based backups and occasionally, in rare instances, we have encountered issues with certain antivirus solutions.

You have the ability to configure your x360Recover vault settings.    For example...

Overview   1. To initially configure an agent, you will log in to the appliance o...

What is a backup policy?  Traditional backup schedules forced you into an all-or-...