1. Prepare a customer environment for D2C

What's the difference between AutoVerify and Cloud AutoVerify?

We've chosen to implement Cloud AutoVerify testing on a tiered basis. This ensures that we limit the load and reduce the impact on other operations (such as  Direct-to-Cloud backups, appliance-to-vault replications, Virtual Office recovery, and so on.)

Click BootVM under the Configure column on the Protected System Details page:

Then, click the check box to enable boot checks.

Axcient-hosted vaults report AutoVerify results on the Protected System Details page. (This is the same way appliances report such results.)

Based on the new tiered testing structure, results are broken up into multiple parts, showing the different testing intervals.

In this initial preview release:

Results of the most recent AutoVerify checks can be found on the Protected System Details page: 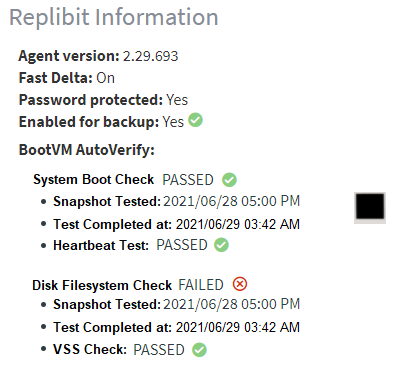 Note: Cloud AutoVerify is enabled only for Direct-to-Cloud endpoints on Axcient hosted vaults.

Cloud AutoVerify will initially be monitored directly on the vault.

Additional enhancements and hardening for Cloud AutoVerify are planned over the next several x360Recover releases, as we identify any problems and streamline operations to support rollout to 100 percent of Direct-to-Cloud endpoints.

IMPORTANT NOTE: Cloud AutoVerify is an early-access feature as of April 2022. Performance may be subject to change

What does Microsoft Azure involve?  Microsoft offers a cloud program which provid...